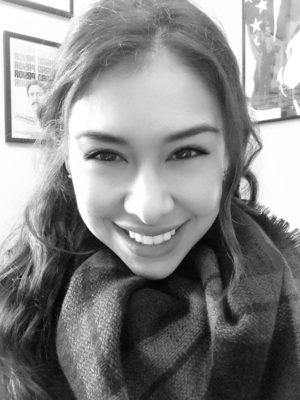 Monica Dominguez is in her final Master’s year at the University of Southern California- School of Cinematic Arts in the Cinema and Media Studies Department. Prior to joining USC, she worked in the film and TV industry as a production assistant, post-production assistant and a casting director’s assistant for various networks including VH1, BET, MTV and Bravo. During her time in the Cinema and Media Studies program, she has written on various cinematic topics including German Expressionism, China’s transition into Modernity, Feminism in contemporary films, Francophone Africa, the Czechoslovakian New Wave and the French New wave. Her primary research interests include Third World cinema, race and gender in Hollywood, and the intersections of race, class and gender in the American media. She has presented on several panels nationally including the Film and History Conference. She has recently provided her critique of film as a jury member for the International Film Festival in Guadalajara, Mexico (Festival Internacional de Guadalajara 32).

The practice of worldbuilding has allowed her to creatively find solutions to problems, an invaluable tool to think divergently. She hopes that one day robots will figure how to solve the human problems of discrimination and prejudice since humans can’t figure it out.